Every time you look through your camera’s viewfinder, frame and press the shutter, you’re using a shot. At this point many of them use them by intuition, or you’ve gotten used to some of them because you feel comfortable, is your style. Or you have not stopped to think too much about it and the many possibilities and messages they convey.

The shots offer multiple meanings and sensations, and using them, will become one more way of transmitting an emotion, a message; they will help you to explain the history you have represented in images. Let’s see all the different shots in two groups, the first will group the shots according to the size of a subject in the scene (proximity. Or distance) and the second, depending on the angle of the protagonist regarding your camera.

The general shot is the most descriptive as it is the most open shot (the one that captures the most percentage of the scene). Here the characters have little or no identity, because what is important is the location; the setting or context of the image. The general or long shots (sometimes also called panoramic) are those that you use for example to photograph landscapes, either urban or natural. Although in principle, it’s a shot in which no particular characters stand out, you can use it to transfer drama to the image. A person (or object) alone in the middle of a vast space automatically leads us to loneliness or detachment.

For this type of shots, the most recommended lens is the wide angle (from 14mm to 30mm approximately). Because it is the one that allows more angle to pick up a scene.

This shot allows you to contemplate the characters of the whole body but also a wide information of the context; it allows you to recognize the subject and the environment precisely. It is not as ‘impersonal’ as the previous one, but the background remains just as important visually, as the object or person portrayed. We can find this type of images in documentary photography, fashion and travel among others.

The entire shot shows the subject in full form, framed by the photo frame from head to toe but without cutting either. In this shot, you begin to focus attention on the character, you are able to recognize all the details and characteristics of the portrait. With some relevant information of the environment. This is the first shot of those described so far, which would fall into the category of ‘portrait’. Although it is the farthest shot of the subject in this photography. If you are interested in portraiture, I recommend that you combine this article on shots with that of Caro, who talks about body language in portraiture.

We know this type of shot as ‘American or western’ because it became popular thanks to this cinematographic genre. The shot ¾, allowed them a good framing of the cartridges and a good angle from which to record when they drew the weapon. Here, the subject is approximately from the head to, more or less, the knees. This type of shot allows you to sufficiently highlight the face and figure of the person.

In this shot you do focus on the subject photographed. You are also getting closer, so intimacy is increasing, by framing the character from head to waist. It is a shot widely used in fashion and in ‘formal’ portraits (interviews, official portraits, news presenters…). They consider it an intermediate portrait in which feelings and intimacy begin with the subject photographed.

The short median shot includes the face and bust of the person photographed. Here the figure appears almost out of context, especially if you shoot vertically. Their purpose is to capture feelings, they are more dramatic and descriptive images.

A shot of the face including the shoulders or part of the shoulders. In this shot, it already achieves a high intimacy. It They intend it enhance the features of the face, the look, the expression, the gestures…it is the portrait of the face itself. It possesses a high emotional identification with the spectator.

The face fills the frame, by any element of the background. The face is the message itself, through which you can express a thought, a feeling or an emotion. Here intimacy and closeness is extreme, as well as that perceived by the viewer who observes the image. You can perfectly analyze all the features of the face, the look, etc. It has a large intimate load, and from the head to approximately the chin.

If you want more inspiration for your portraits, be sure to look at the fantastic selection of challenge on this topic here.

Displays the detail of an object or a person. If you have a macro, this is a fascinating shot, as fascinating it is, also, to look for those details that nobody else sees. To look for the beauty in the small things (literally), their textures, their colors… You can transmit many sensations with only a small fragment of reality.

If you need some more inspiration, take a look at the details you sent blog readers here.

Too Many Concepts? Here’s A Story…

Once upon a time, there was a morning in time. You’re heading for a crowded square (long general shot). As you advance, you see something that attracts your attention a few meters beyond (general shot), you continue advancing to observe it better, you are only a few meters away; at this height you can clearly distinguish the silhouette, from head to feet (entire shot). Since it still stops everything and no one is watching you, you decide to get even closer to observe clearly.

At this point you are close enough to distinguish it perfectly. But as you look straight ahead, you miss the lower part of the figure (shot ¾), a step further and you glimpse perfectly your subject from waist up (middle shot or waist), only a little more. If you extend your hand you can touch it, although as everything is a little strange you prefer not to do it …

A little more, now you only focus on the bust and the face, (middle shot), another step, shoulders and face (foreground). And finally, you are so close that you have his face right in front of yours (you pray that no one is looking at you or so that the world does not turn again just now), you analyze in detail all his expression, his features, his look (foreground). But what interests you is not in the face, it is in those eyes, so you get closer and you look in the reflection (detail shot).

You’re surprised by what you’re seeing, that reflection… doesn’t reflect the square. You recognize the sofa, the bookshelf, the carpet, that horrible painting that given to you for your birthday…

Types Of Shots Depending On The Angle Of The Camera

We place the camera above the character but in a more open angle than the zenith. This type of angle endows your subject with a certain dramatic charge. Since you position your character or object below a ‘normal’ angle, which dwarfs it, and endows it with a certain degree of vulnerability. You can use it in any type of photography, but you will see that it is common in photography of children (since they are naturally smaller).

The camera is parallel to the ground, i.e. both you and your camera look in front of the character or object. It’s our usual way of looking, it evokes closeness and trust.

They place the camera below the character. This point of view enhances the character, you give him strength and grandiosity.

The camera is below the character and perpendicular to the ground. If the counter-peak enlarges the character, the nadir gives it almost unreal proportions.

You can see all of them grouped in this scheme that I show you below:

Other types of shots:

It’s quite a cinematographic shot but you can also use it in photography. It is a question of using two shots, one opposed to the other or in response to the other. For example, a back facing our main character can give us a connection, conversation or relationship between the two characters that appear. Even if we simply see the back of one.

It is a shot that in a single photographic image does not make much sense, since they use it in cinema to show subjectively. What the protagonist is seeing at that moment. It can, however, be useful to you in a photographic series, so just in case I present it to you.

I think I could sum the moral of this article up in an imperative with which I hope you will agree… Move! Go ahead, go back, come closer, go away, get on a ladder, throw yourself on the ground. Get dirty, challenge heights, have fun, which in the end is always the most important thing. Do you want that photograph? Go get it? If you get it, your muddy pants, your sweater pierced by the branch of the tree you climbed to get that zenith… it’ll all be worth it. When you finally get home and download that image…

You should see your face in that magical instant. I got it! (And if photography doesn’t just work for you, with everything you’ve learned about shots in this article, you’ll always have cinema left).

And you know, if it’s been useful, interesting, or has helped you to solve any doubt, share it with your friends, family or whoever you want. Thank you very much! 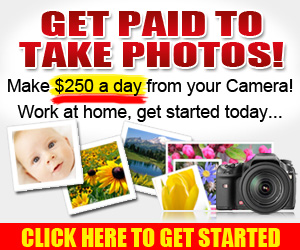 How To Get Your Photography Noticed

Hi, I am John Frinking owner of this site. Get your limited 7 day Photography Job trial for just $1 Right Here

Any cookies that may not be particularly necessary for the website to function and is used specifically to collect user personal data via analytics, ads, other embedded contents are termed as non-necessary cookies. It is mandatory to procure user consent prior to running these cookies on your website.

Want To Get Paid For Your Photos?

Now it could be your turn to sell your photographs